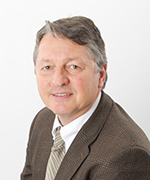 Proud graduate from Billerica Memorial High School, Suffolk University, and the New England College of Optometry. He was in private practice in Swampscott, MA until joining Nashua Eye Associates in 1989. This afforded him time to also teach at the Cotting School Vision Clinic from 1989-1999. He also serve as Senior Clinical Examiner for the National Board of Examiners in Optometry from 1993-2020. Consultant for the Crotched Mountain Rehabilitation Center, and Nashua Public Schools. He has also served on the Board for the Greater Lawrence Head Start Program, Board of Trustees for the New England College of Optometry, Vice/Chairman of the Andover Conservation Commission, and President of the NEWENCO Alumni Association.

He currently resides in Andover, MA with his first wife. He keeps involved with his 3 grown children, often helping with the challenges of the day. He and his wife will enjoy time on the Cape and other relaxing vacations. As a golf survivor, many weekends are spent building with Habitat for Humanity.