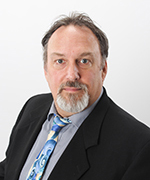 Dr Karl Engelhart was raised in Nashua since 3rd grade at Mount Pleasant School. In his teens he played trumpet for the Spartans Drum Corps and the Nashua High school band. This was most likely the reason he has been listening to music ever since. He has spent much of his life on Coliseum Avenue starting at the old Alexanders bakery , hanging out at the Nashua Mall, and then learning about glasses working at Montgomery Wards Optical Shop thru Optometry School.

Dr Engelhart's first and only Optometry position starting in 1987 , is at Nashua Eye Associates, where he has fit thousands of area residents with contact lenses and glasses. He also treats lots of red eyes , takes out foreign bodies, and does many other medical eyecare procedures.

In his spare time, he especially enjoys travelling and exploring new places with his two sons, his wife and daughter. He always has one or two books going in between watching classic movies. They kayak and hike when its warm, and like to ski when it's cold. Join him in the Nashua Lions Club. "Nashua has been a great city to live and to work in!"