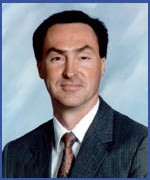 Dr. Wingate founded Nashua Eye Associates. He has performed well over 30,000 cataract, laser, and other eye surgeries. He performed the first cataract/intraocular lens implant and first Lasik surgery in New Hampshire. He was a founding partner in the Nashua Eye Surgery Center which was the first Certificate of Need Eye Surgery Center in New England, and has been its Medical Director since.

He completed three years of pre-med at Baylor University and received his Medical Degree from The University of Texas Medical Branch in Galveston, Texas. Following his Internship in Pennsylvania, Dr. Wingate was in the U.S Army serving as a Battalion Surgeon for the 1/27th Artillery in Vietnam and received a Bronze Star for Meritorious Achievement. His second year in the Army was spent at Ft. Belvoir, Alexandria, Virginia. He completed his Residency in Ophthalmology at the Medical College of Virginia in Richmond.

Dr. Wingate lives in Hollis, New Hampshire, with his wife Vera. Their son and his wife and two boys live in Windham and their daughter and her husband and two girls live in Nashua. He loves interacting frequently with them. He has been an avid snow skier, scuba diver, and water skier over the years. His main hobby has been growing his 500-plus orchids whose origins are from all over the world. He has received numerous awards for his orchids and is a member of the New Hampshire, Massachusetts, and American Orchid Societies.